I’ve written about the opportunity in Nio (NYSE:NIO) often, always driving the same point across. The company operates in a booming sector (electric vechicles), so NIO stock has a long runway ahead of it. Short-term challenges are mere opportunities for investors to engage long.

The fundamentals of this young company are already impressive. It’s delivering growth at a rapid pace. As such, it doesn’t even need to wow us with its bottom line yet.

Nevertheless, its bottom line is also impressive … to a degree. Nio generates almost $300 million in cash flow from operations. Management is executing well on its plans and the EV opportunity is just beginning. The internal combustion engine still dominates, so the switch-over to green alternatives still has years to go.

For now, Nio investors need only worry about expanding the revenue line. The rest will fall in place just like it did for Tesla (NASDAQ:TSLA). Speaking of which, Tesla did all the hard work to pave the road for all the EV companies to follow. It was touch-and-go even as recently as 2019.

Many experts pretty much called it dead, then it rose from the ashes. Now Tesla also generates over $6 billion in cash from its own operations. Both of these EV companies are over the hump.

Nio has a few things going for it. First, it operates in the largest EV market in the world. It also has the backing of the local government. That’s a formula for success, where failure is not in the cards unless there’s a complete global black swan event to derail it.

I’ve just presented the arguments for the viability of the bullish thesis. For the remainder of this write-up, I’ll discuss the short-term price action in NIO stock.

NIO Stock Has Found Its Footing 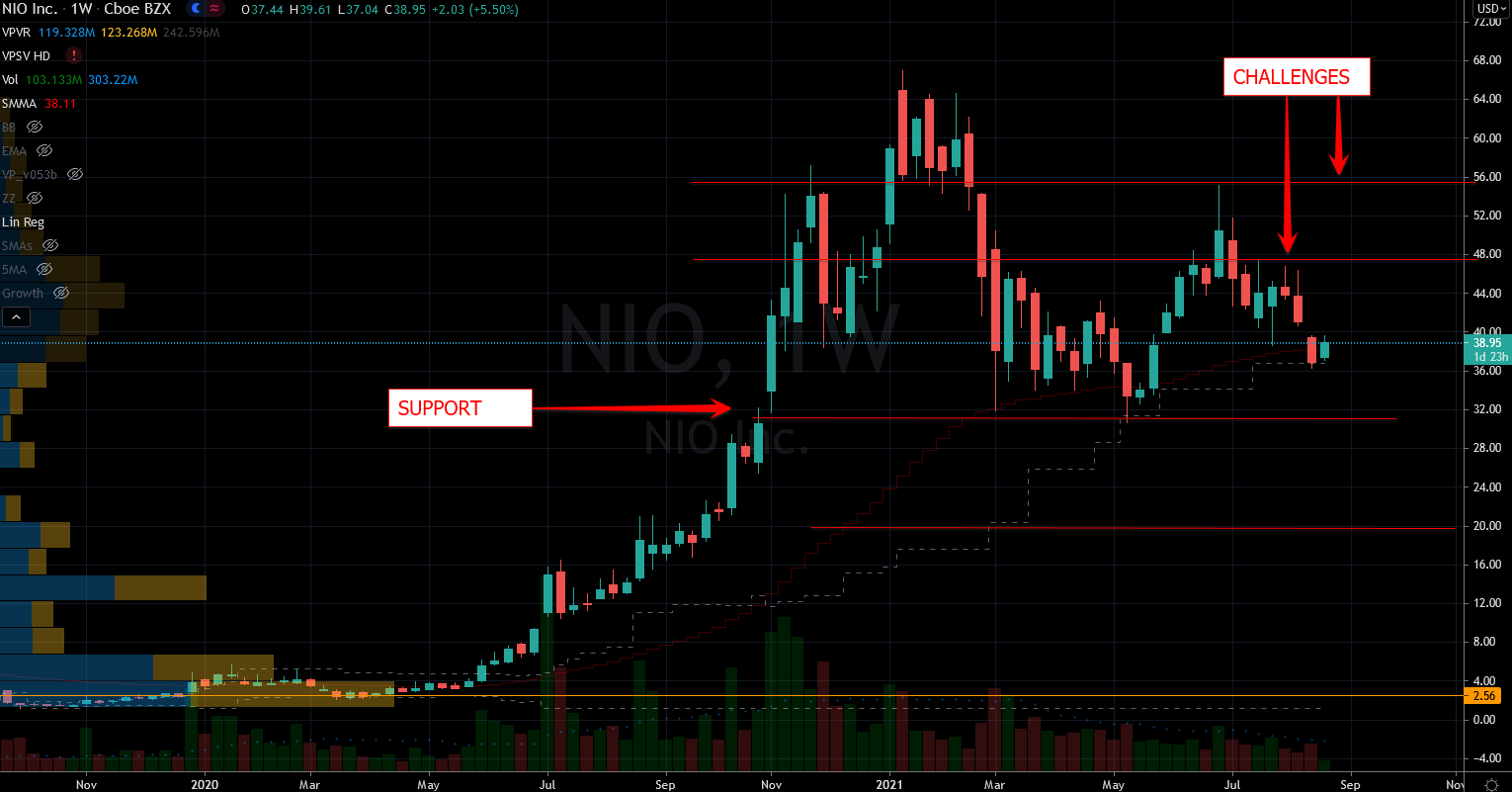 For this we have to look at the technical perspectives in the charts. This is where most investors push back from the proverbial table. However, I urge you to hang in there and keep an open mind. This will serve as a practical example of the buy-the-dip concept in the long run. Besides, I will keep it simple and in simple English.

NIO stock rallied hard off the pandemic lows. Then it collapsed 50% from the January highs. The bulls put on a good showing and establish a floor near $31 per share. That level was not random as it was pivotal last November. Then more recently, Nio stumbled again this time 34% from the June highs. Magically it found footing again above the same support levels.

Critics could point out that Nio has so far failed to recover the highs. That challenge will present itself in the future. The first order of business when in a correction is to find footing. That’s usually a process and not just one moment in time. From here, the bulls can rebuild momentum and tackle the recent failure levels.

It won’t be easy, but with time, the bulls will be successful.

Recently, Chinese equities fell out of favor from political fears. The government is intent on regulating profits for its successful companies. The more obvious targets were companies like Alibaba (NYSE:BABA) and Didi (NYSE:DIDI). Nio may have suffered in sympathy just the same. Investors — even high profile ones like Ark Invest — gave up completely on the geographic sector. They panicked and sold the good with the bad.

Lastly, we have to consider other short-term factors like the Jackson Hole event ongoing now. We don’t know what the message will be out of it, nor do we know how investors will react. My guess is that Wall Street just wants it out of the way, so they can go back to buying stocks.

Add all of these factors up, and any major dip in NIO stock is viable to play with.