It hasn’t been but two weeks since I last discussed Tesla (NASDAQ:TSLA) stock with my readers. No, I don’t dream of it, but I’m taking the opportunity to make an important point. Also, TSLA stock had a massive move, so it warrants an update.

Investors need to adapt to new environments. In case you missed it, we all need to be traders too. The days of buying a stock for the very long term is old news. You can still do it, but you’d be missing out on a world of opportunities.

On June 16, I pointed out that there are buyers lurking in TSLA stock near $575 per share. What transpired since then was a 19% rally off that level. I was clearly right about the bulls having the upper hand in this stock. Critics who still take issue with it are being too stubborn for their own good. This is not the Tesla of 2019.

Management has since taken the reins and can now implement strategies freely. They are no longer slaves to borrowing in order to grow. The profit-and-loss statement is impressive to boot. How they got here doesn’t really matter, investors just have to accept it. I did, and I was definitely an antagonist in the earlier years. Then the facts changed, so I changed my mind. 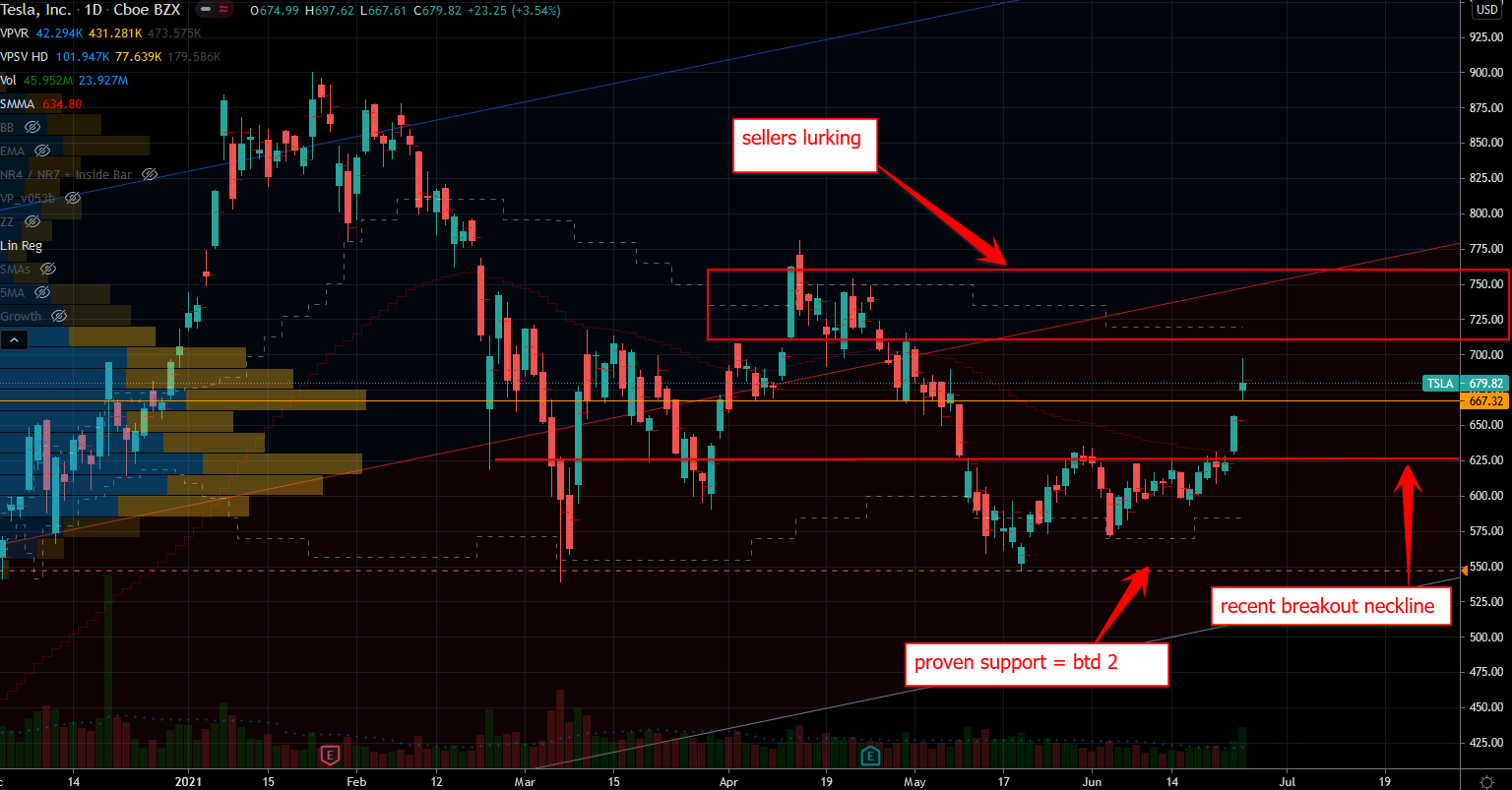 From here, the fast trade in Tesla stock is coming to an end. As it approaches $720 per share it will find sellers. This is nothing against the company, it’s just normal price action. Don’t confuse this with a recommendation to short it. I wouldn’t do that because the bears are on their heels. The bulls are in control and I would not want to fight the tape.

In addition, the entire stock market is setting records this week. That is just too much enthusiasm to fight for no particular reason.

The easy trade in this stock that almost never fails is to simply buy-the-dip. If I’m not already long Tesla stock I should just wait for the next one to engage. The neckline for this last rally is sharpest at $640 per share. That’s the first place I would consider buying buying for a trade.

So far we’ve discussed nothing for the long term because that’s a different notion altogether. No one can deny with how much this company has rewarded its early owners.

Kudos to Catherine Wood from Ark Invest for having seen it so early. I’m guilty of making fun of her when she called for $4,000 Tesla pre-split. Foot-in-mouth, I acknowledged that I missed it and have lived happily since then.

Even when I hated it, I exclusively traded it on the long side in spite of my skepticism. That’s the main point to make today. We should set aside feelings and just trade the facts. There is an underrated meme on Wall Street that says that “price is truth.” In this environment this serves me right. I look left on the charts and see all the truths I need. There I find what to do and what levels matter next. Almost everything else is noise and conjecture.

Investors who like to actively trade TSLA stock should learn options. The premiums that it offers are huge. The perception is that options are more dangerous than stocks is false. There are several strategies that are much safer than risking $700 to buy one share of Tesla stock. The details of that are a conversation for another write-up.

Become a Billionaire by Investing in the Industry With Infinite Potential
Despite Recent Rebound, BBIG Stock Is Still a No-Go
The 3 Most Undervalued Renewable Energy Stocks for Your February Buy List
Brace Yourself for Another SOFI Stock Selloff in 2023
SBUX, QCOM, F Predictions: 3 Hot Stocks for Tomorrow